Black Vintners are a Rare Breed in U.S. But Are Growing! 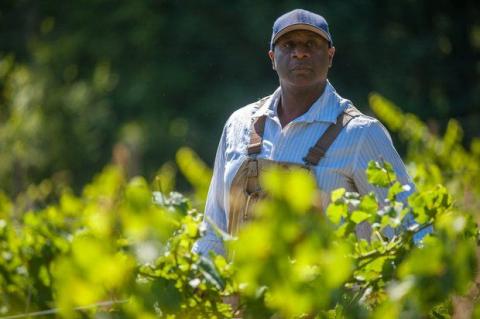 Black Vintners are a Rare Breed in U.S. but are Growing!

Like some rare mineral that requires mining a ton of earth just to find a speck of product, black-owned vineyards are a tiny fraction of the American wine producing industry.

Tony Faustin, of Abbey Creek Vineyards – the only African-American owned winery in the state of Oregon and the subject of a forthcoming film documentary about diversity in the wine industry – belongs to a tiny fraternity that may number fewer than two dozen operators. [See companion story elsewhere in this issue.]

According to the website of Wines & Vines Magazine – a B2B journal – there were approximately 7,100 vineyards – including a little more than 1,000 so-called “virtual wineries” –– in the U.S. in 2014, up 4 percent from the year before.

Virtual wineries describe winemakers, often sommeliers, fine-dining restaurants or other industry consultants, who own no land or buildings but craft branded varietals from the harvested grapes of others.

A spokesperson for Wines & Vines says it does not solicit any data regarding the race or ethnicity of vineyard owners in its annual census. Nor does the National Black Farmers Association – which counts 109,000 members – breakout a separate category for winery owners.

SlitelyChilled.com estimates there are 23 or fewer black-owned wine vineyards in the U.S. and 18 of those are in California. That estimate is based on Internet searches, the inactive but still displayable website of the Association of African American Vintners, and Zuri Wines, a black-owned wine appreciation and viniculture education group in Los Angeles that includes a network of black-owned vineyards in California on its popular wine tours.

One reason offered to explain the low number of black wine growers has a lot to do with the high cost of entry. Unless a vineyard is passed down through the generations in the same family, the cost of entry to develop a vineyard, and the accompanying seen and unforeseen operating costs can be formidable, even for well-heeled entrepreneurs.

Wines & Vines estimate that as much as 90 percent of California’s vineyards are owned by fifth generation and in a few cases, sixth generation farm families who whose European ancestors first crossed the country in the mid-to-late 1800s in covered wagons. They brought saplings and vines with them to transplant from “the old country.”

Blacks don’t have that kind of lineage in the industry.

There are several  exceptions worth noting however with the recent emergence of Vineyards and Wineries which are owned and operated by Black families. Esterlina vineyards and winery is owned by the Sterling family in Healdsburg  California, has been in operation for thirty [30] years.

The Brown Family own and operate Brown Estates in Napa Valley California and have been growing grapes since 1980 and began producing their award winning Zinfandels in 1995.

Not too far away, in Sonoma Valley, is the African-American owned Sharp Cellars. Founded in 1998, the vineyard is prized by critics and consumers for its world-class Zinfandel, Pinot Blanc, Pinot Gris and Pinot Noir.

Patrician Vineyards Plus, a black-owned vineyard and commercial vegetable farm in an unincorporated area near the town of Rowland, N.C. (population 1,200), could be the oldest black-owned vineyard in the world, at over 100-years-old. It has a certificate from the state saluting its 100-plus years in business as a family farm. Several calls to the owners were not returned before press time.

Other black vintners who are making wine in the South include Lauren and Jerry Bias, of Surgarleaf Vineyards in Charlottesville, Va. Based in New York City, she is a mortgage banker and he is a hedge fund partner who, press reports say, desire to make wine in Virginia fulltime.

Another veteran black winemaker is the retired San Francisco neurosurgeon Dr. Ernest A. Bates, who began making wine in 2000 and went on to enjoy high critical acclaim with his Black Coyote Cabernet Sauvingnon Reserve from Napa Valley.

And Andre Mack, the sommelier consulting with Abbey Creek Farms, is also a winemaker, who brands his wines, Mouton Noir.