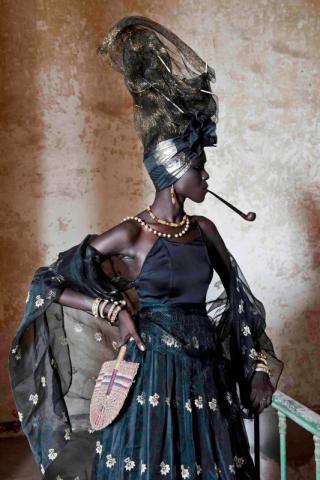 Aptly named, the 1:54 Fair acknowledges a vast African continent of 54 constituent nation states, the majority of which broke free only in the past 60 years from a long period of colonial rule. Despite their recent emergence as independent countries, there are already two or three generations of professional contemporary artists with established reputations and followers; as well as academies and museums to train and exhibit artists, and Biennales in Dakar (since 1996), joined by the East Africa Art Biennale (2000), the debutante Kampala Art Biennale (2014). Until recently a viable art market has been missing from the mix, reflecting the absence of high net worth local collectors. This has begun to change, notably with the emergence of great oil wealth in Nigeria.

The 1:54 Fair is the brainchild of Touria el Glaoui, a Moroccan businesswoman whose father Hassan is one of that country’s most revered artists. Glaoui debuted 1:54 in London, November 2013, featuring 50 galleries and 100 artists,  and the fair was an instant success, critically and commercially.

In 2014, the fair returned to London’s Somerset House, where its attendance almost doubled and it now arrives on our shores for the first time, in a slightly abbreviated version, at Pioneer Space in Red Hook, Brooklyn.

For anyone who follows or collects local artists of the African Diaspora, there is a natural curiosity as to what kind of art is being produced by artists who continue to make their primary home on African soil, or who have established successful careers in the capitals of the ex-colonial powers (London, Paris, Brussels).

One of the important benefits of the 1:54 Fair will be the opportunity to compare and contrast the work of artists from the continent with that of African American artists. The struggle for civil rights and the legacy of slavery weighs heavy on the art of African Americans; while Africans, though severely and often brutally oppressed as colonial subjects, were always at home.

Artists on the continent do not share the same philosophical and practical dilemmas and allures of assimilation and integration – both economic and personal – faced by African-Americans. For them, the challenges center on the merits of a different integration, namely the opposing forces of Western Art vs. Traditional Art; they want to establish African Art as a unique contribution to the international contemporary art scene – much in the same way that artists in Asia and India, and even Latin America, are attempting.

The vast range of African religions, with their elaborate rituals and sacred objects, along with imported Muslim and Christian traditions, are an inexhaustible cultural and spiritual resource for artists on the continent. While Europe looks back to the renaissance for inspiration, Africans can look back on what has, albeit lately, been acknowledged as extraordinary art making in the guise of sacred and ritual objects.

In addition, there are “traditions” in contemporary African art that set it off from Euro-centric traditions. I am thinking particularly of the role of “salvage”, which has been invested with the continent’s rich craft traditions to produce works of extraordinary refinement. Although a phenomenon that once may have been strictly a product of necessity, it is now a telltale marker that has been quietly infiltrating the work of African American artists.

Among African artists currently working, the best known is El Anatsui  (Ghana, b.1944). His lavish tapestries, woven from bottle caps flattened by hand, grace the wall of collections throughout the world, while fetching prices above one million dollars at auction.

This success has not been lost on such artists as his student, Bright Ugochukwu Eke (Nigeria, b.1976), whose sculptures woven from plastic water bottles are a joy to behold, and whose work will be on view at 1:54.

I have chosen a few works that are my personal favorites to share with you and to entice you to make the trip to distant Red Hook. Your visit will be the start of a journey into the richly populated world of contemporary African artists and recent masters.