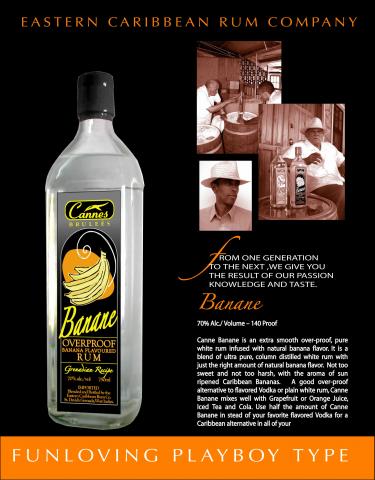 Uncle Joe started it. After returning to his native Grenada at the end of World War II, Joseph Chasteau worked in Grenada's LaSagesse Estate, learning everything he could about making rum from the distillery master, Louis Strauss. Years later, when he was in his '70's, he began to pass on his considerable rum knowledge to a young family member, Eeron Redhead, who was visiting Grenada from New York.  Eeron was a college student studying international relations who intended to go into international trading after graduation. Until his first visit to Grenada, he knew nothing about rum. Today, nearly 25 years after meeting Uncle Joe, Eeron is the master blender and president of the Eastern Caribbean Rum Company in Grenada.

About ten years before Eeron's birth, his parents had migrated from Grenada to New York. When his mother was pregnant with him in 1970, she returned to Grenada so that her youngest child would be born in her native land. The family moved back to New York after his birth, and Eeron grew up in Harlem. He attended college at SUNY Stony Brook, New York where he majored in international relations concentrating on Latin America and East Asia, with a minor in music. It was while he was in college that he took his first trip to Grenada and under Uncle Joe's tutelage, had his first lesson in rum making.

It introduced him to a new world, and he was fascinated. "Coming to Grenada, seeing some of the old rum distillers there, listening to the stories - I guess my love of history and a taste of adventure got the best of me," he said. "The lessons from Uncle Joe made me want to do it myself, to create something from the land." But at that age and that time, he was still focused on other matters. "I graduated from college in 1994 and through my studies of East Asia, I was given a post-graduate scholarship to study in Japan. I learned Japanese while I was there and stayed on for a while to teach English."

Returning to the U.S., Eeron worked for Tokyo General, a Japanese commodities trading company in New York. But the rum bug had bitten; he thought more and more about it. After two years at the trading company, he left.  Instead, he took a part time job with a legal documents company so that he would have free time to travel to Grenada, to learn more from Uncle Joe, to read and study everything he could about rum and how to make it.  He took other lessons in rum making and he blended small batches with Uncle Joe. "By that time," he said, "I knew my life would be rum." In 1998, with the backing of his mother and other investors, Eeron Redhead established the Eastern Caribbean Rum Company.

Grenada is a dot of an island, a nation with an English and French background in the southeast Caribbean Sea, about 100 miles north of Venezuela. It is 21 miles long and 12 miles wide, divided into seven parishes and  home to about 100,000 people. It has long been known as Spice Island and the wafting aromas, particularly of the nutmeg, cinnamon and mace that grow there, tell the visitor why. Grenada has been making rum for over 300 years although, as a small island further out toward the Atlantic Ocean than most Caribbean islands, its rum has not received the notice that its spices have nor the publicity given to other Caribbean rum producing islands

The quality of Eeron's rums may change that. He has become a master blender. He blends his rums by hand in small batches, using traditional island methods and letting each batch express its own voice. This is how he achieves high quality finished products that consistently earn high praise.

His Cannes Royale Extra Old Rum, 80 proof (40 percent alcohol), is his premium bottling, a blend of rums aged six to eight years made using centuries-old methods. It is copper-shaded, smooth, balanced and aromatic and has won international awards and laudatory reviews ($29).

More than 80 percent of the world's rum is made in Caribbean islands, the reason they are considered rum's spiritual center. Eeron Redhead's production is still small but its quality is high. Which is why his rums fit comfortably and naturally into the Caribbean's spiritual center.