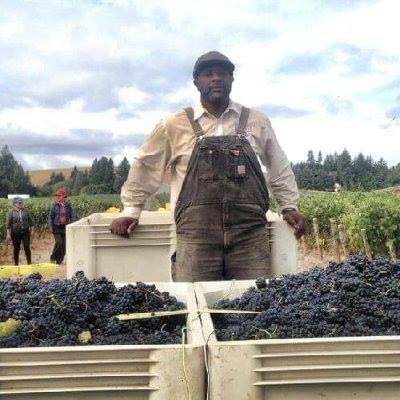 Becoming the first black winery owner in Oregon is not the kind of stop-the-presses achievement that Black History Month calendars typically mark.

But Bertony “Tony” Faustin, owner of Abbey Creek Winery  – smack dab in the state’s renown wine region of Willamette Valley – might change that when a film documentary, “Red, White and Black,” is released about a year from now.

Passionate and single-mindedly focused on making and marketing wines for average consumers without any fussiness or pomp, the film will focus on Faustin’s uniqueness and drive to succeed in an industry where minorities make up a growing fraction of the industry.

His Asian-American winemaking partner, Ocean Yap Powell, and their network of fellow Oregon-based winemakers – a rainbow of ethnic diversity and lifestyles – will also be featured in the documentary.

Andre Mack, the award-winning black, New York-based sommelier – who Faustin considers a mentor and good friend – is also in the film.

“I’m not the face of Oregon wine,” says Faustin, in matter-of-fact understatement.

“Visitors come into the tasting room and you can see the surprise on their face when they realize a black man is behind this,” he says. “Some of them even question you, quizzing me like, ‘where’s your boss?’” But they leave happy and they encourage me to keep doing my thing.

“Yeah, I’m not the face of Oregon wine, but I’m going to be a relevant part of the industry whether people like it or not.”

As an African-American winemaker and vineyard owner, Faustin is a member of a tiny but growing fraternity in the U.S.

Curtis Green, founder of the wine marketing  and networking group, TEN FOLKS and publisher-founder of SlitelyChilled.com, says what is happening in Oregon’s wine industry is truly historic.

“When I got started, there were only five black vintners and winemakers,” he recalls. “To think that there are 23 now is historic.”

Dewey Weddindgton, of Ferment Marketing in Tigard, Ore., is helping Abbey Creek Winery develop a brand strategy. He suggests wines and beers are essentially commodity products. What he does to build distinction for clients like Faustin is to create a backstory that identifies what is unique about the growers, their histories, personalities and the locations of the vineyard.

This is one reason why, Weddington puts forth, that diversity is so important in the wine industry: the infusion of culture in a mainstream environment.

“Cultural diversity does many good things no matter the industry,” Weddington states. “For wine, diversity brings with it those elements that have made the winemaker who they are. A Latino winemaker has different family relations, music, food, art and history than their white counterpart.

“A Haitian-American winemaker, like Bertony Faustin, has yet another set of cultural elements providing a unique base to winemaking and connecting with the public. Think of the flavors in food alone that shape taste and preferences yet reshape them as well. To remain a white, Euro-centric industry limits the cultural inputs and ultimately the potential of wine.”

Weddington says nothing speaks more to how Abbey Creek is changing the scene than the sound track in its hip, but rustic tasting room.

“You know as soon as you step in that this is not your average tasting room. You can feel the energy, and the music can range from Soul, to Reggae, Blues and Pop, not the standard soft Jazz of wine. This comes through in the wine and that unique cultural influence is a positive change.

“Once upon a time, advertisers use to only put the perfect, glamorous couple in white linen to promote wines. Not anymore.”

From Brooklyn to Oregon

In many ways, Faustin is the perfect client for Weddington to work with given that Faustin’s background and early years gave absolutely no hint of the future that has come.

Born 44 years ago in Brooklyn’s Crown Heights section in a large, working-class Haitian family, Faustin says he was a latchkey kid – one of five siblings – who grew up with parents who believed in tough love but little supervision.

He attended college in the south and became an anesthesia assistant. Career opportunities in the medical profession took him from Florida to North Carolina and then, in 1999, he landed a job at a Portland, Ore. hospital where he would meet the woman he would marry, his wife Jennifer.

Providentially, his father-in-law owned a 50-acre vineyard he purchased in 1982. But he maintained it as a farm stand only to enjoy tax breaks the way a Christmas tree farmer derive similar tax breaks.

But the death of his own father in 2007 – a man who Faustin says was a workaholic and who never told his son that he loved him – would prove to be the “jolt” that turned him into a winemaker and vineyard owner.

With the death of his father and unhappy working at a hospital, he negotiated a plan with his father-in-law to takeover the vineyard and quit his day job.

He studied viniculture for six months at a community college famed for its wine and agriculture curriculum, retired the existing farmhands and took on Powell to assist in the day-to-day management.

“I had no idea that this is what I wanted to do,” Faustin says. “I wasn’t even a wine drinker. My major inspiration was to look out for my family and be something they would be proud of.

“I really don’t care about the awards and good press we’re getting. I want to make a difference.”

Of the 50 acres Faustin took over, only 15 are currently being cultivated for wine production. Selling direct to customers, Faustin estimates that he generates about 800-to-1000 cases a year of Pinot Gris, Chardonnay and Pinot Noir and Gewurztaminer.

For the moment, Faustin says, he is content with that output.

“I’m my own boss,” he says. “I don’t have to follow a pedigree or a formula. Everything I do is out of the box and I try to keep an open mind.”

Faustin is making it a family business, too.  His 8-year-old son and 7-year-old daughter work with him in the field.

But Faustin is eager to bring in other people of color and different lifestyles who want to learn the wine business as much as he wants to learn from them.

In fact, in addition to Powell, much of “Red, White and Black” includes his network of diverse collaborators – some of whom were well established as winemakers before Faustin entered the business.

For example, Remy Drabkin, from the LGBT community, is making her Remy wine brand and Jesus Guillen, is a Hispanic winemaker of White Rose Vineyards – both in Oregon – who were in business before Abbey Creek started production.

“This documentary will cover a larger array of ethnic and gender diversity in the wine industry that may otherwise be as overlooked as I am,” Faustin notes.

The director behind the movie is local actor and director, Jerry Bell, Jr.

Driving Faustin as well is a personal campaign to shatter the hoity-toity image of wine.

“We’re trying to breakdown this idea that wine is upscale and elite and can only be enjoyed by the rich,” he declares. “It’s only grapes that are being fermented!

“Our people feel they can’t do wine tastings or order from wine menus and the industry responds to that by not marketing to them. This is literally what got me to do the documentary.

Those wishing to order from Abbey Creek Winery should visit the website, www.AbbeyCreekVineyard.com