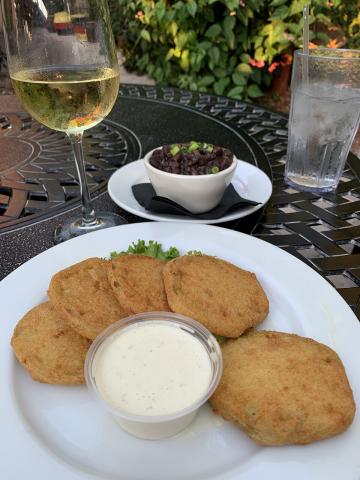 We’ve all heard of fried green tomatoes (speaking of the food here, not the movie).  But like many items that are considered part of Soul or Southern cuisine, have you ever wondered why this delight never seemed to make it north?  After all, they do have tomatoes up north, and pretty good ones at that.  So why did fried green tomatoes become associated with only with Southern cooking and Soul Food?

Well, it all comes down to the weather.

While it’s true that the growing season down south starts weeks earlier than its northern counterpart, it is also true that from the middle of July through August –prime tomato season up north- in the high heat of the Southern summer, tomatoes shut down (the same thing happens, BTW, to chickens!).  At that time of year down in the Carolinas and in Georgia, Alabama, and the rest of the Deep South, it is just too hot for them and they stop producing flowers or fruit.  But they don’t die.  They just sort of go dormant.

But here’s the thing: by the end of August and into September, when their northern cousins are turning yellow and spindly and are getting ready to say Good-bye, southern tomatoes get their second wind, a new lease on life.  They start budding again and producing flowers.  Since it is still mild enough for various pollinators to be buzzing around, they once again produce fruit.

But, even though it is still mild, the days are getting shorter, the sun is dipping lower in the sky, and the nights are getting cooler…not northern, cool, but cooler.  What this means is that although the plants are still producing nice fruit, the conditions are such that it will never ripen.

Those tomatoes will get big and they’ll look hearty, but they’ll stay green.

And so it is, that for as long as people have been planting tomatoes in the south, they’ve had a large supply of big green tomatoes every fall.  Being the clever people they were, folks down that way started coming up with ways to use this annual autumn bounty.  They made green tomato jam, green tomato relish, and fried green tomatoes.

The rest is Soul Food history.