From the Humidor, Fratello Toro Review 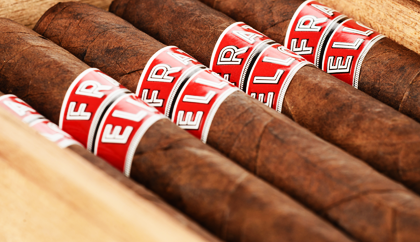 Fall is one of the best times to smoke a cigar. When the heat of summer gives way to the mild crisp air of fall, the trees begin to resemble a Monet painting and the kids take their first step in another long school year it only seems right that a good cigar should accompany some well deserved down time. When enjoying such a pleasure in a setting such as this, your cigar should be like a friend, a fraternal brother for an hour or more. What better cigar to share that time with than one that has camaraderie as its namesake; the Fratello Toro will be that friend.

On the dry puff (that is to say when drawing on the cigar before it is lit) a mild sweetness and peppery spice encompass the pallet. When lighting the cigar those flavors stay consistent but the true body of the cigar is revealed. Have no doubt, this cigar is full bodied and full flavored with a wonderful cinnamon spice that plays throughout the copious amounts of smoke each puff creates. It has a wonderful draw and a beautiful white ash that is only slightly flakey.

The retrohale only adds to the complexity of the flavor, allowing the sweet and occasionally herbal tones to blossom. As I approach the 2nd third of the cigar the pepper tones become more mild, smoothing the cigar out. It is without doubt a cigar with many different faces, and the smoothness is pleasantly surprising for a cigar with so much Nicaraguan spice early on.

As I approach the last third of the cigar the smoothness gives way to some more bitter tones and the sweetness nearly disappears, leaving me with some spice and earth tones. It finishes with strength bordering on a harshness that may turn some smokers off but is just another layer of complexity added to the cigar.

The real kicker for this cigar is the price point. At only around $9 a stick it is entirely within the everyday smokers budget to pick up this fine cigar and give it a shot. Fratello also recently added a Maduro blend to their portfolio, providing a more robust flavor and tones of chocolate and coffee coming from the San Andreas maduro wrapper.